Marnhull Entertains arranges a film every month apart from August and December on the fourth Tuesday of the month at 19.30 in the Village Hall.  Doors open at 19.00.  Tickets are £5 and can be obtained from Robin Hill Stores or Marnhull Stores.

The true story of British businessman Greville Wynne (Benedict Cumberbatch) unwittingly recruited into one of the greatest international conflicts in history.  Forming an unlikely partnership in the hope of preventing a nuclear confrontation, Wynne and Soviet officer Oleg Penkovsky (Merab Ninidze) work together to provide the crucial intelligence used to defuse the Cuban Missile Crisis. 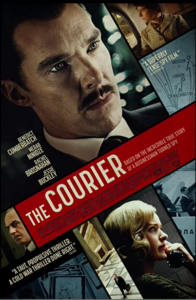 “This is a damn good, explosively tense story that focuses on the friendship that develops between two men on opposite sides.  And it is plainly wonderful.”  Deborah Ross, The Spectator

We’re looking forward to a new programme of concerts !

The first visit of Artsreach to Marnhull will be ‘Done to Death, by Jove’ from Company Gavin Robertson on 18th February at 19.30.

The British Detective Genre – gone wrong! Holmes and Watson meet Poirot and Miss Marple (alongside the usual suspects) in a spoof homage – who murdered Lady Fanshawe? Why is Matron Maudesly so friendly with one of the guests at the Clinic of Hopes and Cures? Why have the sound cues got mixed up?

A cast of six set about bringing a group of suspects and sleuths together to discover whodunnit, and how… except four of the actors are stuck in the van by the side of the motorway, and only those two knights of the Theatre, Sir Gavin and Sir Nicholas, have managed to get to the venue; but ‘the show must go on’!
Expect a whirlwind of fast costume changes and misdirected acting hiccups in a show where even the set’s gone missing! Touring Dorset with Artsreach. Recommended 12+
“Truly intimate, funny and energetic” Pitch Magazine

A special concert is planned for the summer to celebrate the Queen’s Platinum Jubilee.

The Messenger was established in the 1980s as a church news sheet and has since grown to become a 32-36 page A4 publication delivered free-of-charge to all residents of Marnhull.